Sinn Féin’s spokesperson on Foreign Affairs, Seán Crowe TD, has attended the trial of the 12 Catalan political and civil leaders in Madrid over the past two days.

Crowe travelled to Madrid to attend the trial with his party colleague and MEP for Dublin, Lynn Boylan.

“We decided to travel here to show our support and solidarity with the former Ministers, the Members of the Catalan Parliament, and the civil society activists that are on trial.

“These 12 political and civil leaders are in the dock in what has all the trappings of a political trial. It is our belief that their prosecution is politically motivated and they are political prisoners. Facilitating people to vote is not a crime, but preventing them by force should be.

“From the beginning of this process I called for the 9 political prisoners to be released from their pre-trial detention and that the charges against them should be dropped. Some of them have been imprisoned for over a year on pre-trial detention. It is clear that their continued imprisonment and the stress of this ongoing trial are taking its toll.

“Now that they are on trial in the Spanish Supreme Court we wanted to show our support and solidarity to them in person and to observe the trial.” 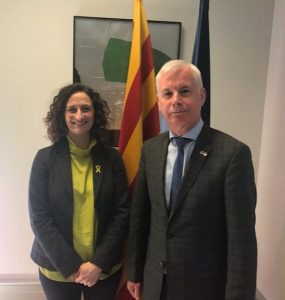 “This is a political issue, not a legal one. The Spanish Government needs to enter into meaningful dialogue with the Catalan Government to find a political solution. It needs to stop using the police and the legal system to attack the Catalan independence movement, which is a legitimate political movement.

“This is one of the most pressing political issues in Europe. We cannot ignore this important issue of citizens being prosecuted for pursing purely peaceful and democratic means in determining their future.”