Sinn Féin’s spokesperson on Foreign Affairs, Seán Crowe TD, has called on the ESB to stop importing coal from the notorious Carrejón mine in Colombia.

Crowe, speaking after he raised the issue in the Dáil, said:

“I was disturbed when I found out that large volumes of coal supplying the largest power plant in the State, Moneypoint power station, are coming from the Cerrejón mine in Colombia.

“Figures from the ESB show that Moneypoint has used 12,568,717 tonnes of imported coal since 2011. Some 11,264,239 tonnes of this coal, just under 90%, has come from Colombia, and the vast majority of that has come from the Carrejón mine in the north east of Colombia. 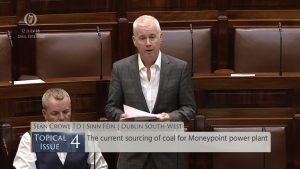 “This mine is infamous for the destruction of the environment, forcible displacement of indigenous people and Afro-Colombians living in the area, and workers’ rights abuses. During the past 32 years, more than 20,000 Afro-Colombian and indigenous people have been forced from their traditional homes to make way for this ever-growing mine.

“Land grabs and evictions have been carried out by Cerrejón’s agents using intimidation, forcing the communities to hand over their land for laughable prices using their dominant position and relying on the complicity of the state authorities.

“The mine does not bring any benefits to the local communities. Successive Colombian Governments have encouraged and facilitated the huge tax avoidance these mining companies partake in. Ironically it’s Colombian taxpayers who are, therefore, actively subsidising the mines which in turn is destroying their environment, health, and livelihoods while the perpetrators pay little or no tax.

“The mine is slowly exterminating the indigenous people in this area. The communities do not want this mine. They want access to water and other natural resources in the area so that they can produce agricultural products and live their lives in harmony, free from the environmental degradation this mine continues to bring.