Sinn Féin’s spokesperson on Foreign Affairs, Seán Crowe, has called on the Irish Minister for Foreign Affairs, Charlie Flanagan, to strongly protest against the demolition of Palestinian homes and community structures by the Israeli military.

Crowe raised the case of Khan al Ahmar in the Dáil and how the entire village is under threat of demolition.

“2016 was a record year for the demolition and confiscation of Palestinian dwelling and livelihood structures in the occupied West Bank by the Israeli army.

“Figures from the United Nations Office for the Coordination for Humanitarian affairs (UNOCHA) and the Ecumenical Accompaniment Programme in Palestine and Israel (EAPPI) show that 1,089 structures were demolished or confiscated in 2016 leaving some 1,600 Palestinians displaced and affected the livelihoods of a further 7,100 people.

“The figures so far for 2017 tell us we are heading for another record year of demolitions.

“On Sunday it was reported widely in the Israeli press that 42 homes and businesses in the village of Khan Al Ahmar, between the city of Jerusalem and Jericho in the occupied West Bank, were served with demolition orders by the Israeli army.

“These demolitions, once carried out, would in effect destroy the entire village. Such a widespread issuance of demolitions orders at one time – in one village – is not only unprecedented but a clear declaration by the Israeli military that they plan to evacuate the entire community.

“If these demolitions take place they will leave literally hundreds of men, women and children homeless.

“Such actions would also constitute a grave breech of the of the Fourth Geneva Convention, which prohibits the destruction of personal property by an Occupying Power unless it is rendered absolutely necessary by military operations. It also prohibits all forcible transfers of civilian populations by an occupying power. 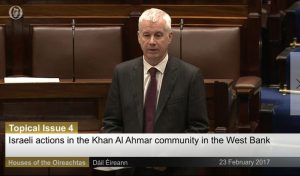 “I called on Minister Flanagan to make urgent representation to the Israeli government to reverse this demolition orders and to urgently send officials from the Irish Embassy Ramallah to the community as a sign of support. I welcome the clarification that I received in the Dáil that the Irish Ambassador to Palestine will visit Khan al Ahmar in the coming days.

“The continued demolition of Palestinian homes and structures, as well as the continued building of illegal colonial settlements in occupied Palestine is an attack on the two-state solution, and is a deliberate and planned attempt to completely undermine and destroy that possibility.

“I also called on the Minister to act on the Sinn Féin motion which was unanimously passed in the Dáil in December 2014 and I urged him to urgently recognise the State of Palestine.”