Dublin South West Sinn Féin TD, Seán Crowe, has said that it is not too late for the Government, and the Minister for Health, to do what is clearly right for thousands of chronic pain sufferers, and lift his cruel restrictions on the pain relief patch Versatis. Crowe was speaking at the launch of a postcard campaign that calls for a reversal of this controversial decision.

“The Minister for Health Simon Harris’s arbitrary decision to restrict the prescribing of Versatis has added to the physical pain and mental distress of thousands of low income citizens, and their families, who relied on the patch to relieve their pain

“I am not sure if Minister has taken into account the additional costs associated with alternative medication, or increased hospitalization, the more demands on home help, home care hours and an increase in demand for anti-depressants, before he made this decision to limit access to this patch to those in pain.

“How can he, as Minister for Health, say that it’s perfectly fine to prescribe Versatis for non-shingles related pain relief to those who can pay on the one hand, but then on the other hand claim the patch is not suitable for those on low-incomes, who are dependent on medical cards or the drugs payment scheme. 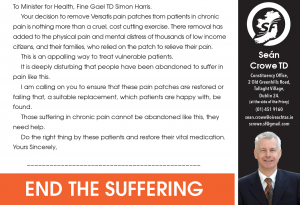 “I believe that at the stroke of a pen the Minister for Health can go back to the HSE and request them to carry out a holistic review around this cruel decision to restrict the use of Versatis. He can and should revert back to the position where those experiencing chronic and unbearable pain can avail of Versatis regardless of their family income. That is what this postcards appeal is about.

“Even after his cruel and ill thought out decision it is not too late for Minister Harris, and his Government, to do what is clearly right for thousands of chronic pain sufferers and lift these cruel restrictions on the pain relief patch, Versatis. I am appealing to people to support this postcard initiative and reverse this cut. ” 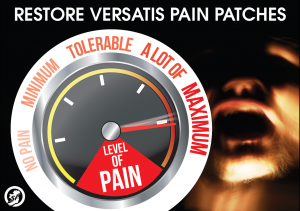